Hi penguins, its thursday and there is tons of new updates on Club Penguin including the Card-Jitsu snow party that we have all been waiting for! Yes, Card-jitsu snow is finally here and available for us to play, how awesome is that? There is also a brand new Club penguin newspaper like usual and Sensei has a new background...

So, the card-jitsu snow party is finally here and we are now able to play Card-Jitsu snow and trust me....IT ROCKS! There is now new snow-themed items to collect on your journey in becoming the ultimate snow ninja and there is also Card Jitsu videos to obtain, featuring the story of Sensei. The new dojo is here too along with the Card-Jitsu snow and I must admit, its way better than I anticipated! The Card-Jitsu party itself is quite similar to last years however at the ski village and ski lodge, there is card-jitsu snow themed rooms! The ski lodge is now a beautiful snow palace. So penguins, be sure to have a play of the brand-new Card-Jitsu snow, it requires alot of teamwork! 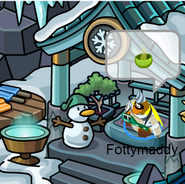 The newspaper this week looks slightly different than the previous issues as it has a very cool pattern on the top of the newspaper which I am a huge fan of! It talks about the new dojo and the widely awaited Card-Jitsu snow party :)

As expected, Sensei finally has a brand new player card and a new meetable background which I am not too keen on. I think Sensei is a bit too small in this background but oh well, be sure to meet him if you haven't already!

Add a photo to this gallery
Retrieved from "https://clubpenguin.fandom.com/wiki/User_blog:Fottymaddy/Club_Penguin_Updates:_May_23rd_2013?oldid=1027049"
Community content is available under CC-BY-SA unless otherwise noted.
FandomShop DC Trivia GalaxyQuest