Hi penguins! So, today is thursday....and you know what that means? UPDATES! Yay! There isnt many updates on CP this week apart from a new pin and new newspaper issue! There should of been a new treasure however for some reason there isnt? There is also diamonds appearing in numerous rooms on CP, probably for the Superhero Party! Let me start...

This weeks pin is placed at the attic on top of the ski lodge. It looks like it is released for the superhero party! I can't quite make out what it really is meant to be though. However, it is named the Robot Villain pin so most likely for the villains at the Superhero party! 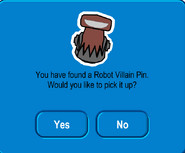 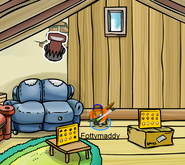 There is also a brand-new newspaper like there usually is every week! This weeks issue looks to be about the crystals sprouting up in many different Club Penguin rooms. Also, it talks about the Operation:Hot sauce and shows that we successfully completed it!

For some reason, there appears to be crystals appearing in various club penguin rooms such as the dock, snow forts and forest etc. I believe that this is for the upcoming Superhero Party....Bit strange if you ask me?! Only time will tell on why they are doing this though.

It looks like CP has officially lied to us! There is no newly updated treasure book! This totally sucks, I had my hopes up aswell :(

Retrieved from "https://clubpenguin.fandom.com/wiki/User_blog:Fottymaddy/Club_Penguin_Updates:_Thursday_18th_April_2013?oldid=979677"
Community content is available under CC-BY-SA unless otherwise noted.