Down on the river, Joeypengie was approaching a volcano. It looked like a bridge went onto it. So, he was at the bottom of the Fire Dojo! He pulled over near the hot rocks and climbed up a nearby rope. He thought he saw a tunnel. "Anyone in here?" he called. Maybe it wasn't a tunnel. Around him was a lantern, a backpack, and a bowl of puffle food. Wait. PUFFLE FOOD?!?! There had to be a puffle around. Somewhere. "Squeak..." said a small echo. "SQUEAK!!" Now that was a puffle. But Joeypengie couldn't find where it was coming from. He checked the tunnel again. Nothing. He turned around. And, he saw a puffle. It was locked up inside chains surrounded by lava. Herbert must've put it there. Joeypengie found a fishing rod in the backpack and used it to pick the puffle up and bring it over to him. "SQUEAK SQUEAK SQUEAK!!!!" screamed the puffle. Joeypengie simply said, "Are you ok little puffle?" "No no no!" said the puffle. "Hoibet steew bwuddas and seestuzz. Mwee swad." Joeypengie looked at him. "Don't worry little guy. We'll find your bwuddas and seestuzz. You can always count on--" "BRRRRRRRING!!!" His spy phone was ringing. "BRRRRRRRRRRINNNNGGGGGG!!!!" (Hover over spy phone for message. Story continues below phone.) 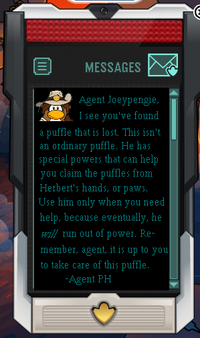 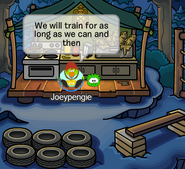 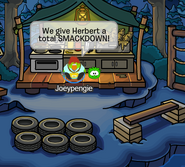