Hello, CPeoples! Today was the 2nd Mariobilly Monday! This week, we started at the Dojo Courtyard. Everything was going fine until we heard a noise coming from the Snow Dojo! We went to check it out, and Tusk was back! We was out to take control of all elements, and get revenge on Sensei! We chased him into the Fire Dojo, where he drained all the hot sauce, and then into the Water Dojo, where he froze all the water! He was almost invincible, but we threw snowballs at him and stopped him! He fled into the Snow Forts, where he found the frozen Snow Minions, and brought them back to life. We defeated them, and Tusk disappeared, leaving his cape behind. Mariobilly, over and out! 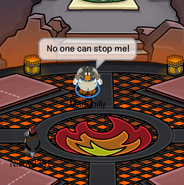 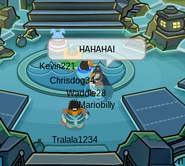 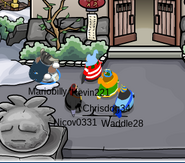 Add a photo to this gallery
Retrieved from "https://clubpenguin.fandom.com/wiki/User_blog:MarieBilly_Archimedes_Shears/Mariobilly_Monday:_May_27,_2013?oldid=1628769"
Community content is available under CC-BY-SA unless otherwise noted.
FandomShop Newsletter Join Fan Lab