My thoughts on SaveTheClubPenguin and 2014 overall

You might be skeptical about this title. For those users who do not own a Twitter account, you might be asking "yo noob, go home, ur crazy." If someone actually comments on that, then feel free to take a ride to the kickboot attraction (Phineas99cp is not responsible of injuries).

But to be serious, #SaveTheClubPenguin is a current hashtag occurring on Twitter, with the finality to cause awareness on the CP Team (former and current staff) of what the players think of CP lately.

What do I think of it? Kudos to you bro. I couldn't agree more. The Merry Walrus Party (formerly known as the Holiday Party), one of CP biggest parties with such wonderful reputation, faced the horrible destination of becoming yet, another disappointment towards many players. This isn't the first time though...it happened the same thing with the Medieval Party 2013 and the Music Jam 2014.

What is CP doing wrong? How they keep repeating the same system in parties.

Party starts inmediately, most of them with no depth storyline on how it happened, and how illogical they are

These are just some examples of certain parties without depth in storyline and how illogical they're. I do understand, however, that it's a "cartoon" in a way anything could happen. However, certain details completely destroy the atmosphere of the party and the game.

This is their party system I happen to notice

Something else what several players (like me) have noticed lately is how CP completely forgets their game, and focus in something else. The CP App was enough to keep working on other apps. Sled Racer is kinda original however, and I accept that since it happened the same thing with videogames (DS and Wii). However, in Puffle Wild, they completely rip-off Candy Crush Saga, and once again, make ordinary puffles look pointless.

They passed the limit when they worked on the "We Wish You A Merry Walrus" holiday special. Is that the reason why parties had less decorations from March to December? Please focus in your game first than doing something else.

In the case of the puffles, CP released too many puffles that players have completely lost the importance of puffles. All of the new Puffle Creatures we've discovered in 2014 have the same personality as the ordinary puffles. However, just like a single carrot people transform it into carrot pie, carrot soup, carrots with ranch, and several other recipes, the "modified" version usually appeal the players in a way they stand out of the ordinary puffles, but in another point of view, they are just the same puffles we have. Is the CP Team actually loving something important in the game itself (puffles)? Doesn't seem like it and I am sure the day scientists announce a cloning machine to clone humans, you will have a clear idea with puffles and how "disposable" they are.

Now, I'd still like to come to another point. The expectation and outcome. Us players usually expect big stuff to occur in parties (such as the Music Jam 2014), specially by the sneak peeks and teaser images CP show but in the end, it is NOTHING as expected. 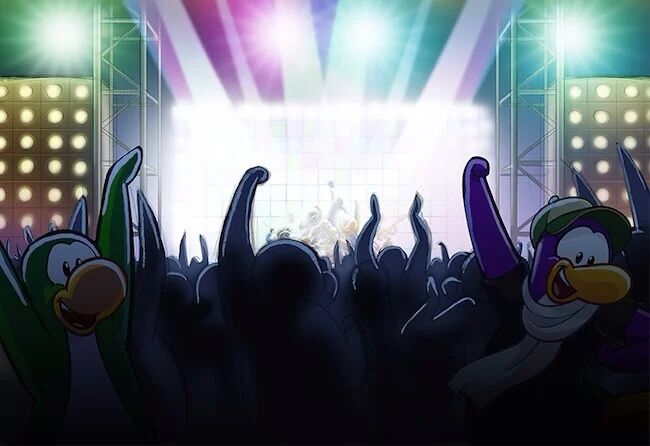 What is the setting of this image? If this question was in your exam, then I am certain you'd fail. Why? Because it's undefined. No such thing occurred during the Music Jam 2014, which makes players to become disappointed.

Another point is that the team barely listens us. Remember back then in March when Spike Hike joked of Violetta coming to this years Music Jam?

Most of the CP Community rejected the idea of Violetta coming to this years Music Jam (and trust me, I did too). Spike Hike "denied" of this idea" eventually but guess what? Right when the Penguin Cup ended and Issue #32 of the Club Penguin Magazine was released, it was confirmed not only Violetta would come at the party but others like Cole Plante would as well! Yay? or nay? One reason why I have trust issues with CP.

What does the previous incident have to do with CP overall? The takeovers. Some appeal to several people while other people get frustrated about it. I'd really love to see another Marvel Super Hero Takeover to return in 2015, but surely Saraapril hates the idea of having another one. Also, it's how CP Team sometimes thinks of itself and not on their players; how they do not listen to us. In that case, I find it time for takeovers to vanish. For the best of the game, for the team, and most importantly, the players. CP SHOULD remove the takeovers ONCE and for ALL. Not ALL takeovers appeal to everybody and you Spike Hike, just by the fact that you love Violetta, it does NOT mean that you should COMPLETELY promote her. (Somehow, it makes me feel that Spike Hike did it to troll us players). I accept the idea of the Penguin Cup, because at least it does not fully promote the 2014 FIFA World Cup Brazil and also, it's a classic party from CP.

I have no problem with the items as well, though I feel it usually gets repetitive. I usually look forward to NEW clothing. Why make clothing teenagers wear lately? The team should let their imagination blow, and do anything they desire.

If CP manages to do that, then 2015 could become into the best year of CP History. I understand it is a challenge all of this, but after all the mistakes CP has done in 2014, I highly hope they take note of this blog post and they make 2015 better.

As always, I am interested to read your comments and I'd really appreciate if several people use this blog post as a reference on Twitter to promote the popular hashtag #SaveTheClubPenguin, with the finality of causing awareness to the CP Staff, posting this many times in posts from the What's New Blog, in their Facebook and Twitter accounts, emailing CP with the exact same idea, posting about this in your blog, etc.

The point is, like I said, cause awareness to the CP Staff and what are they doing wrong.

Thanks for your attention gentlemen