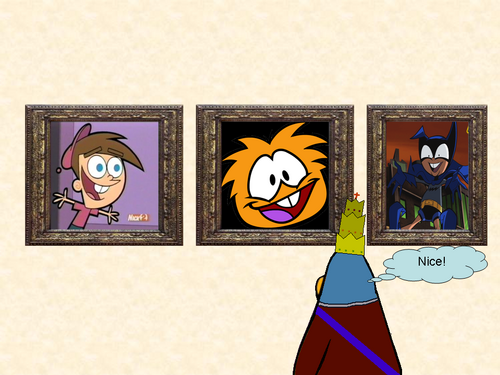 From the image's article:

A little gallery of comparisons between the Orange Puffle (codenamed "Timmy") and two other characters with similar teeth. I haven't even referenced Mater! The adorable teeth gag is nothing new. The third character debuted in 1958, the first in 1999, and Timmy in 2010. CP has a knack for old-school culture. I would also reccomend, by away, that you read up on the third character's ("Bat-Mite") wikipedia article. Considering that the Orange Puffle's debut is in another dimension, chances are, given the teeth and playful attitude, Timmy may have reality-warping or telekinetic powers, like Timmy Turner's fairies or Bat-Mite himself.


Retrieved from "https://clubpenguin.fandom.com/wiki/User_blog_comment:Ced1214/Orange_Puffle_spotted_in_the_Box_Dimension!/@comment-113335-20100214203929?oldid=274308"
Community content is available under CC-BY-SA unless otherwise noted.