YOU'RE invited to my End of PPA party!

Where: Sasquatch (If full, contact me and will give you the new server) In my iggy

Hope You Can Make It! RSVP:RSVP is here

For letting me have a part in "The Vandal Series", I was allgamezrule btw. =D

Well here the time of the recording the time would be in the middle of the night for me... That's The Vandal Series. So don't expect me there.

I was thinking I would like to do like a little music video on CP for Naturally by Selena Gomez and i was wondering if you would record it fo rme. You dont have to do it! It was just an idea:EuropeaI'm bored 22:09, April 4, 2010 (UTC)

Hey Childpengu! You're the second reciever of my Message of Friendship! XD Thanks for being a good friend on IRC, along with Salt. :) I know, this was shorter than my message to Alxeedo... but well, you got a message of friendship! Bye! --DORAEMON THE LEGEND (Hal Homsar Solo) OHAI THERE Can call all you want, but there's no one home, and you're NOT gonna reach meh telephone! 05:35, April 5, 2010 (UTC)

Yes, I do like that song. M-m-m-monster! I also have some more favorite lines from the song, but I'm not saying it here. XD

Hi, Your Invited To My Bday Party, For Ifo Go To User:Merbat/Birthday Party!

Thanks for the award :) I'll put it on my page soon. Speaking of... you also deserve awards!

My best friend award!
Add a photo to this gallery

Don't panic. I can just make it to your birthday party, since it's 2:30 Pacific on Friday!

I think I can make it

HHS is involved in it because I tried to cheer her up by putting on a Alxeedo costume,she said not funny,it made me mad and sad. It's another day in the life of a boy named Johnny Test! 20:10, April 24, 2010 (UTC)

How I got mad?

And I want a apology from Brookelas. I want him to apolagise for always moaning that Sea's mean to him. And Lucas. Lucas should apolagise for framing me on IRC. It's another day in the life of a boy named Johnny Test! 20:30, April 24, 2010 (UTC)

How do you have old member stuff if you are member from today?!?!

May I come to the Penguin Oscars? A program in my computer says I can not fill out the guest stuff. Wonderweez 01:26, April 30, 2010 (UTC)Wonderweez

Thanks for the invitation! But, the PST is the same in my computer clock.Wonderweez 02:27, April 30, 2010 (UTC)Wonderweez

We have been notified that your signature contains an image larger than 20px, uses the template system, has multiple images or has a line break. With our new Signature Policy, we restrict large images in signatures. Click here to learn why we have this policy. Please change your signature to avoid the removal of your current codes. Failure to adhere to this warning will eventually result in a 2 day block.

If you do not know how to change your signature for it to comply with our rules, then please read through this page thoroughly.

Hey Childpengu1. I found another mistake in your signature. If you could follow the instructions found on this page, I could then fix it. Please make a signature page by reading that article, as soon as possible. Unfortunately, a couple of open codes are ruining some pages that your signature is on. --Tigernose

I'm sorry I missed your party. I was going to come, but I forgot. Are you coming to Lord Master's party?WittlePenguin 02:00, May 12, 2010 (UTC)WittlePenguin

Hi! Here is a reminder for my birthday party:

If you are confused with the time, see my party page here for the current time in PDT.

Note: You are getting this reminder because you have signed up for the party and have not requested for a no-reminder.

ROFL! That was so funny! I also liked the special appearances of Hat and Solo. I might even make a blog post telling everyone to watch the Stinky Fame! --Sonic The Hedgehog (Talk | Blog | Contribs) 21:06, May 19, 2010 (UTC)

Hello there! As LordMaster96's best friend, I decided to throw a promotion party for him! See here for more details! Thanks!

Your Invited to my Club Penguin Pirate Party! The Date And Time is in the Banner Below!

Its OK! Maybe you can come to my Puffle Party on the 20th.

Nad also, what's your nest music video? I would like to be an actor of that video! 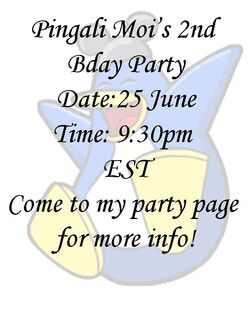 Go to http://bigpenguins.site50.net/1_3_Music-Downloads.html and click on "Island Adventure Party (.zip)".

You make cool videos with awesome effects, and I was wondering if you could show me how??? Maybe we could be in videos together sometime. My YouTube account is yorkielvr333rox.  :) Maybe I could interview you, too. --Yorkay

Hiya, you're invited to my party!

You can find all the info here

I hope you can come!

Hey child, may I join your Music Jam Concert?

You have been invited to my 4 year anniversity on November 28, 2010. You have been chosen as you are one of my top friends on cp.

It clearly says at the top of my page that I do not want any party invites, and I do not play Club Penguin. Thanks. --Tigernose

Sorry dude, I have to get some glasses at that time, so I can't come. I really want to come, but I can't. Do you want adminship on this wiki: http://pawnshow.wikia.com/wiki/Special:MyHome ? You have to know something about Pawn Stars though. Wonderweez · Chat · Blog (Contribs · Editcount) 17:23, August 21, 2010 (UTC)Wonderweez

dude thanks for inviting me to the party i cant wait and BTW are you a member?

Hi, just passing by your userpage. Nice penguin and I saw your videos on YouTube, they're pretty awesome!

Yeah, I saw them, You've done a lot of nice videos, What software do you use? 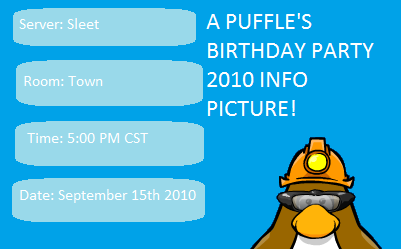 You are invited to my BIRTHDAY PARTY! Please come! The info is Here!

Retrieved from "https://clubpenguin.fandom.com/wiki/User_talk:Childpengu1?oldid=419573"
Community content is available under CC-BY-SA unless otherwise noted.