I see that you spammed a user page here. I've reverted your edit. Please do not edit another user's user page without permission from that user, or you will be blocked.

You were removing content from pages, which is vandalism. Please do not vandalize anymore, as it will result in a block. If you are just having trouble editing, ask an admin, ask on our forum, or ask someone in chat for help. Also, clicking the "preview" and "show changes" buttons before publishing your edits will help prevent unintentional mistakes. If you would like further information on how to edit, please take a look at the Manual of Style.

Have a nice day,

What I 'deleted' was not a post, it was an article. And I did this because it is not official, and there is no confirmation of whatsoever. Not to mention the page was filled with bad layouts and grammar. 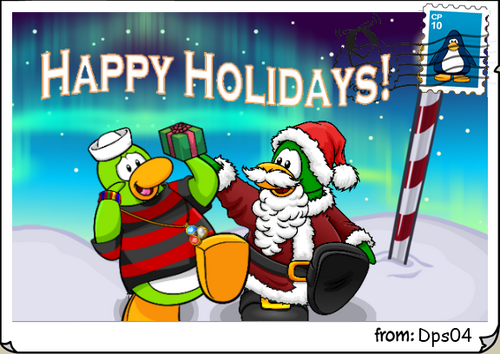 Hello Spikey. I assume by deleting your uh, good edits you mean the Puffle Costumes? I will explain: Theres really no to put the "similar items" trivia when there are many similar items, as a disambiguation page is better. For instance, on the Red Cape page, I could have there be "Similar items are the Lime Green Cape, Blue Cape, Pink Cape, Magician Cape, Yellow Cape, Orange Cape, Purple Cape -" and etc. It would look very cluttered and bleh. When its just a few items that look similar, like the Pink Earmuffs, Blue Earmuffs, and Sea Foam Earmuffs are good, as it is short and sweet. I think five or six should be the limit for similar items in trivia.

The Operation Elite thing seems to be a joke.

Megg later said here that she does not know what "Operation Elite" is ("Megg is true the rumor of Operation: Elite? :O! Mysterious..." "Today was the first time I've heard about this rumor haha") which most likely means she just made it up as a joke and forgot about it later. Even if it was real, we cannot really make a page off of just a name.

Hello,
I've been informed by Watatsuki that you posted a video on his talk page (seen here) that was called "File:You stupid dude" on January 5th. Calling a user "stupid" through linking a file not only violated the Bullying policy, but the Imagery policy as well. I will let you off the hook this time, but I'm here to ask that you do not make any more hurtful comments, because next time it'll result in a block. Since I am giving you another chance, I would like for you to tell Watatsuki sorry on his talk page. Thank you for your attention.
Jeserator HTTR!

I tried before but it came out messy.

Hello Spikey2007,
I've noticed that you have been uploading images that are not properly licensed. Please remember to use the proper licensing when uploading an image. If you are unsure of what licensing is or the proper one to use, this blog may help. It is very important to add this, so please keep it in mind next time you upload an image. If you have any further questions, feel free to contact me for assistance. Thank you for your attention.

Although he may have started working for Club Penguin in 2013, it seems he was involved with Club Penguin even before then. If you look at this archive of his Twitter from 2013, it says, "First I was the student. Now I am the master." Perhaps he was an intern until 2013. You can also see him in some of Club Penguin's earlier videos, such as this video from 2012.

Have a good day,

Retrieved from "https://clubpenguin.fandom.com/wiki/User_talk:Spikey2007?oldid=1588856"
Community content is available under CC-BY-SA unless otherwise noted.