Violetta is the main character from the Latin American Disney Channel series of the same name.

She appeared as one of four special guest performers at the Music Jam 2014, where players were able to pick up a music pack from her.

Violetta is a lively girl, who is kind and friendly. She is always honest, except when she is around her dad. Violetta loves singing but her father never lets her, so she keeps it a secret from him. She hates having to lie, but knows if she gave up her dream that she would regret it.

Violetta has a romantic side, which gets more complicated as she begins to have two loves, León and Tomás. She can get very confused with her feelings.

Her personality changes a bit in season 2, she becomes more confident and is very hyper and energetic; she also seems to be more mature but also very fun and happy. Now that her father lets her attend the Studio as a normal student, she becomes even more interested in music and writing songs; but she still has to face her life: her relationships with León and Diego, her father and Ludmila, who seems to hate Violetta even more that she did before and wants to see her suffering and tries to do everything to make her leave Studio On Beat. 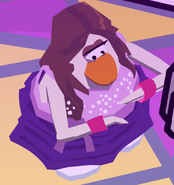 Violetta performing in-game
Add a photo to this gallery