Walruses are creatures on Club Penguin Island, with only two known to penguins. They are widely spread, as there are various species being found all over the Pacific Ocean and Asia.

Master of Snow and an enemy to Sensei and penguins, Tusk is a formidable foe due to his extensive training following a Card-Jitsu training accident one day. He has an army of snowmen and is extremely ruthless when it comes to getting what he wants.[1]

The bringer of presents to Club Penguin Island, and a famous figure. He appeared for the first time in the We Wish You a Merry Walrus special. After it, Merry Walrus hosted the Merry Walrus Party, and he was a mascot at said party, named after him. He made a brief reappearance during the Holiday Party 2015 to give all players the Deluxe Gingerbread House. 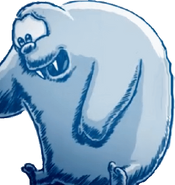 A sketch of Merry Walrus