The Water Dojo was a dojo located behind the large waterfall in the mountains of Club Penguin Island. Card-Jitsu Water could be played here.

The dojo itself was positioned on a large chunk of mossy rock, supported by chains. There were a series of streams that poured down from above onto the floor of the Water Dojo, which then were poured deep down by two small waterfalls in the corners of the dojo. There were two statues of Water Ninjas, and a raised platform where Sensei resided.

There were also a few Card-Jitsu Mats, a box of water balloons, and a few lanterns. There was a bridge which led back to the Dojo.

The Water Dojo first opened on November 16, 2010. At this time, like the Fire Dojo before it, construction was in progress, and a hunt for water was put in place to tame the waterfall the dojo was located behind. After the hunt and construction ended, Card-Jitsu Water training began. For over a week after the Water Dojo was completed, there were many blue lanterns hung up around the room, and two blue banners, which had the symbol of water on them. 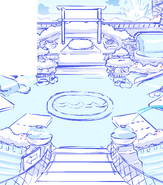 A sketch of the original design of the Water Dojo, as seen in the Card-Jitsu card Water Party Sketch 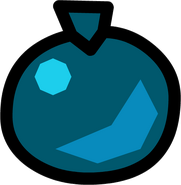 The water balloon that could be thrown in the Water Dojo