The Water Gem was a gem that signified mastery of the element of water, as a Water Ninja, through training in Card-Jitsu Water. It could be received from Sensei by defeating him after obtaining all four items of the Water Suit.

While owned, it would appear on the owner's Amulet. 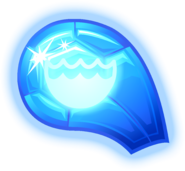 Retrieved from "https://clubpenguin.fandom.com/wiki/Water_Gem?oldid=1920252"
Community content is available under CC-BY-SA unless otherwise noted.