The Water Suit was a set of items earned by playing Card-Jitsu Water. The items were exclusive to members until the Card-Jitsu Party 2011, when Non-Members could play the games Card-Jitsu Fire and Card-Jitsu Water. On May 9, 2013, they became permanent non-member items.

To earn the Water Suit, you had to win many rounds of Card-Jitsu Water by being the last one standing or hitting the gong before your opponents. After winning a couple of times, Sensei would reward you with parts of the Water Suit; first the Wave Sandals, then the Waterfall Coat, next the Torrent Mask, and finally the Helmet of Oceans. Then you could challenge Sensei in a battle, and become a Water Ninja if you beat him, and earn the Water Gem on your Amulet.

Once you got the Waterfall Coat, you received the Water Midway stamp. By earning the complete suit, you were given the Water Suit stamp. If you beat Sensei and became a Water Ninja, you could earn the Water Ninja stamp.

Sensei in the Water Suit 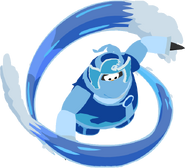 The Special Dance
Add a photo to this gallery

Retrieved from "https://clubpenguin.fandom.com/wiki/Water_Suit?oldid=1879073"
Community content is available under CC-BY-SA unless otherwise noted.