All rooms have four different paths, one at each edge of the screen. Each room has a mechanical part (2011) or a tree with bark missing (2016) in one of these directions, and the player has to pick that particular path. Picking the correct paths leads to the exits. The following are the ordered correct paths: 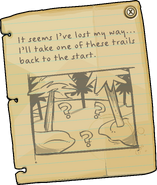 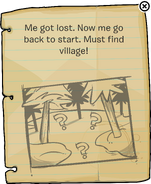 The note in the lost room (2016)
Community content is available under CC-BY-SA unless otherwise noted.
Advertisement