Wizards are special penguins in Club Penguin. They cast spells, mix potions, and typically wear robes, pointy hats, and carry a magic wand or staff. The Lighthouse became a Wizard Workshop during the Medieval Party 2012. During the Medieval Party 2013, Gary the Gadget Guy taught penguins how to cast spells after setting up a Wizard Lab at the School, after being given his ancestor's spell book by Rockhopper, who found it during his journeys.

Wizards learn to cast many spells at Medieval Party 2013. Here is a list of confirmed spells: 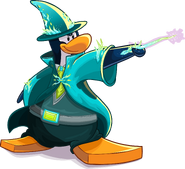 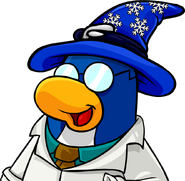 Gary as a wizard
Add a photo to this gallery