Worms are limbless invertebrate creatures. They were used in Club Penguin as the main bait in the Ice Fishing game, in which certain obstacles caused them to be lost, however, can of worms could be catched to obtain an extra worm, but only if at least on worm was lost. In the Soda Seas level of Aqua Grabber, worms could be found by bumping the upper-left side of an air pocket on the left side of the ground. Then, the player could pick up the worm and feed it to Fluffy the Fish, who then could be fed to the Mullet, who then could be brought to the net for a bonus of 1000 coins and the Prize Mullet stamp. Worms are also used in the Ice Fishing mini-game from Club Penguin: Elite Penguin Force, a worm inside a can could be found in the Lighthouse, and Herbert P. Bear uses a can with a worm inside, in PSA Mission 10: Waddle Squad.

A can of worm found in Ice Fishing

A worm used as bait in the Aqua Grabber level, Soda Seas

A worm on a hook, as seen in issue #123 of the Club Penguin Times 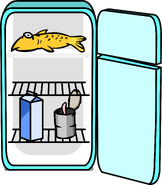 A can of worms inside the Fridge 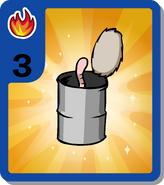 The can of worms Card-Jitsu card, obtained in the Water Booster Deck