The X-Wing fighters are ships that the rebel pilots use to battle in space combat during the second Galactic War.[1] They are one of the main space combat vehicles used by the Rebel Alliance, known for their "x"-shaped wings.

An X-Wing in attack mode 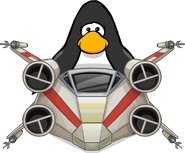 The X-Wing Costume
Add a photo to this gallery

Retrieved from "https://clubpenguin.fandom.com/wiki/X-Wing_Fighters?oldid=1836062"
Community content is available under CC-BY-SA unless otherwise noted.