Were you looking for the item with the same name?

Yarr is Rockhopper's red puffle. He was the first red puffle ever seen on Club Penguin Island and Rockhopper Island. Yarr was named so because he always walked to Rockhopper when he shouted "Yarr". Yarr is one of the most popular puffles in Club Penguin, along with the Keeper of the Boiler Room and Lolz.

Yarr loves to go surfing and is an adventurous puffle. Ever since Yarr's passion for surfing was discovered, the Club Penguin Team added a feature that allowed penguins to surf with their red puffles if they walked them to Catchin' Waves. Yarr has his own Puffle Bed which is Dark Red.

Yarr's look has changed a lot over the years. When Rockhopper visited the first few times, Yarr had the old puffle look. Since then, every time Rockhopper's Player Card changes, Yarr's look changes. The same has happened with Rockhopper when they updated the looks to make it more modern. Yarr was given the standard puffle look on September 12, 2013.

Appearance in the Animated Shorts

Whenever Rockhopper throws a snowball, Yarr's looking through his telescope

Yarr on Rockhopper's Player Card during the Adventure Party: Temple of Fruit

Yarr looking through a telescope

Yarr with Rockhopper entering a cave 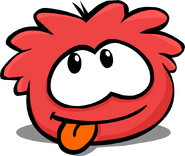 Yarr sticking his tongue out 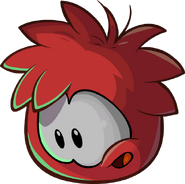 Yarr during the Medieval Party 2013

Yarr and Rockhopper being carried over penguins, as part of The Party Starts Now 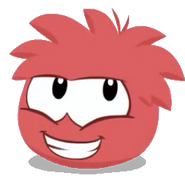 Yarr's "funeral" in the Rockhopper vs. Mighty Squid, while Rockhopper thought he was dead

Yarr's icon in the inventory 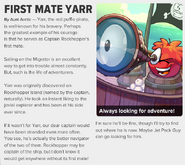 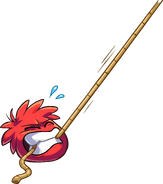 Yarr spotted on the Migrator

Yarr spotted from the Crow's Nest of The Migrator