Yearbooks are a series of books published by the Snowball Press. The yearbook always recalls the major events during the last year in Club Penguin, such as parties, new rooms, new puffles, as well as anything else that happened. They first appeared at the 2nd Anniversary Party and have been released at all the Anniversary Parties since. On each page there is a hidden button showing a pin from the month you are viewing. There are currently eleven yearbooks. They are located in the Book Room at the Coffee Shop. 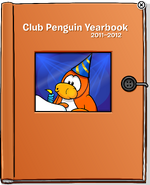 Retrieved from "https://clubpenguin.fandom.com/wiki/Yearbook?oldid=1836070"
Community content is available under CC-BY-SA unless otherwise noted.