Not to be confused with the server of the same name.

Yukon is one of the main characters of the stage play: Quest for the Golden Puffle. He is a timid male explorer. He claims to be "allergic to danger", but he still follows Alaska into scary places. He is frightened by many things, while Alaska (considered his polar opposite) is a lot more brave than him. 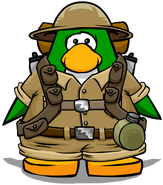 What Yukon would look like on a Player Card.

Yukon hanging a bridge in a Penguin Play Awards short.

Alaska and Yukon in Card-Jitsu.
Add a photo to this gallery

Retrieved from "https://clubpenguin.fandom.com/wiki/Yukon?oldid=1801494"
Community content is available under CC-BY-SA unless otherwise noted.