Yum Yum Yuck Yuck is a former game from the Beta Team. It features a Pink Puffle who eats O' Berries to complete levels, while avoiding green fruits.

The character, a Pink Puffle, starts in an area with a pair of O' Berries and a green fruit, which bounce off the walls and ground. The player needs to move using the arrow keys in order to move to the sides and jump. The game's goal is to fill the Yum Yuck bar by collecting O' Berries, and avoiding the green fruits, which lowers the bar's progress. Whenever filling the bar, the player can choose to either replay the level, or to increase the difficulty of the game. If the bar hits 0, the player can try and replay the level.

Level 2 starts with two pairs of O' Berries and green fruits, and all levels starting at level 3 start with three pairs. 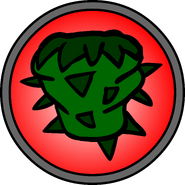 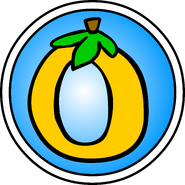 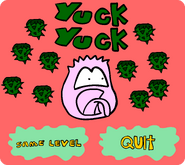 The game over screen after eating too many green berries 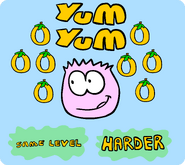 The next level screen after eating enough O' Berries

Retrieved from "https://clubpenguin.fandom.com/wiki/Yum_Yum_Yuck_Yuck?oldid=1879378"
Community content is available under CC-BY-SA unless otherwise noted.