Zeus the Moose was a character in the Stage plays Team Blue Rally Debut, Team Blue's Rally 2, and Team Blue vs. Team Red. He was a mascot of the Blue Team, along with Tate the Migrator. He usually wore the moose head, and sometimes the Blue Track Jacket. He had been seen to be somewhat nervous, shy, and timid.

"Head of the Team Blue Crew, this slightly unsure mascot is here to dodge the ball and hopefully throw it, too. "There's no excuse when the moose is on the loose."" 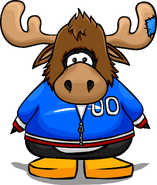 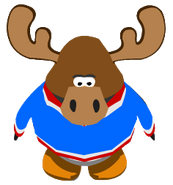 An advertisement for the play in issue #147 of the Club Penguin Times, featuring Jupiter and Zeus the Moose
Add a photo to this gallery
Retrieved from "https://clubpenguin.fandom.com/wiki/Zeus_the_Moose?oldid=1910257"
Community content is available under CC-BY-SA unless otherwise noted.